Are Your Competitors Or Bots Wasting Your Ad Budget?

If you’re running pay-per-click ad campaigns on platforms such as Google, in this day and age, your campaigns are likely affected by click fraud – and it’s consuming your budget!

Below we’ll uncover the dark realm of click fraud, ad fraud, click bots, and how to prevent your advertising budget from becoming a victim of them.

Creating quality and effective ad campaign is not an easy task. It’s also not a particularly inexpensive one and requires a rather large investment of time and money. That’s one of the reasons why it is so frustrating to discover that your campaign has been targeted by click fraud or ad fraud, both of which can quickly and negatively impact your marketing budget.

With these issues becoming more and more common, our team wanted to take the time to take a closer look at both ad fraud and click fraud and examine what steps to take if you believe you are a victim of either.

Not everyone is familiar with the term, and you might understandably be wondering, “what is click fraud?” The concept is actually fairly straightforward. Many marketing campaigns pay to have certain links promoted when certain search terms are used in search engines like Google. These are often paid for by click, meaning that the more people who click the link, the more money marketers spend. Click fraud occurs when someone who isn’t interested in the service or product in question clicks on those paid ads (PPCs). This is commonly done by some business competitors and is designed to drain their rival’s marketing budget.

It can also be done by someone who wants to hurt a business in some way – a disgruntled customer, perhaps. Regardless of the origin, the fraudulent clicks will raise the marketing campaign’s price tag all the same.

We know about click fraud, but exactly what is ad fraud? Ad fraud is fairly new and has been recently on the rise. Ad fraud is a type of click fraud, but far more refined and sophisticated than the simple process described above. Instead of an individual clicking on links, ad fraud occurs when developers generate fake clicks on PPC ads using websites to drive traffic to a specific ad.

This isn’t done for quite the same purpose as click fraud as described above. Instead of clicking to deplete a competitor’s budget, ad fraud seeks to benefit from the ads they post. Fraudulent parties who host those ads on their websites tend to generate quite a bit of money from them, resulting in a large payout to the website owners rather than the owners of the ad. As mentioned above, this can be done via websites, botnets, or mobile app malware and is often conducted as part of an organized gang and complex network. Note that ad fraud is technically a cybercrime.

If you find that your ads have been targeted by ad fraud or click fraud, you might also come across the term “invalid traffic” (IVT). What is invalid traffic or IVT? As the name implies, IVT refers to traffic that is not genuine – clicks that don’t come from parties genuinely interested in the product or service being advertised. It’s important to note that IVT does not always indicate fraud and accidental clicks or web scrapers. In fact, it is relatively rare to classify IVT as fraudulent activity, and finding evidence of this is not necessarily cause for concern.

You’re probably wondering exactly how many fake clicks your PPC ad is receiving. The answer varies, with one study from the University of Baltimore indicating that 14% of all PPC ad clicks result from fraud. Another found that sometimes fake clicks can make up as much as 65% of PPC ad clicks. The best answer likely lies in the middle of these two numbers, with the latter mostly in local industries or services that are particularly competitive.

Whatever the exact percentage, it should be noted that around 90% of PPC ad campaigns will regularly experience some click fraud.

Are there any consequences for individuals who perpetrate ad fraud or click fraud? This depends upon your location in the world, with the USA leading the globe in legal action against this type of fraud. Most major click fraud or ad fraud perpetrators have faced punishment, including prison time and settlements as large as millions of dollars. The Methbot/3ve conspirators, for example, were jailed for wire fraud, conspiracy to commit computer intrusion, and money laundering.

Unfortunately, not every country specifies click fraud as a crime, but the actions used to perpetuate it might be illegal even if the fraud itself is not. Laws in China against unfair competition, for example, can sometimes include competitors clicking on paid ads.

The prospect of recognizing this issue might be overwhelming, but don’t worry – there are a few ways to determine click fraud on your ads. First, you can manually monitor your IVT and keep an eye out for the following:

If you’d prefer to have your ads automatically monitored for fraud without investing too much of your own time, there are click fraud prevention solutions that can detect problems and respond proactively on your behalf.

There are a few specific culprits to watch out for when it comes to ad and click fraud. Short for bots, robots are bits of code created to carry out automated tasks. This often includes collecting data for sites like Google, which uses it to map the internet and build their algorithms.

More specifically, Click bots are easy to design and are quite effective at generating fake clicks on places like social media. A botnet is a network of bots designed to carry out a specific task en masse. This can be click fraud, DDoS attacks, steal user data, or even to spread viruses – there are several ways in which botnets can wreak havoc for anyone who encounters them. This is especially true as ad fraud botnets have become more sophisticated over the years, with some even moving to exploit flaws in marketing strategies or mobile malware.

Yet another potential perpetrator of ad or click fraud is click farms. But what exactly are click farms? Most commonly, click farms are networks of tablets, phones, and servers devoted to any number of fraud issues – and because they’re so easy to control, only a few individuals are needed to make a huge impact.

Click farms are used to inflate social media engagement, boost view views, or click on links – often ads – to generate money for the owner (or the fraudulent party hosting the ad). You can recognize click farm services by looking for terms such as “buying traffic” paired with “genuine USA traffic” and “no bots”. Note that neither of these statements is true – the traffic generated will almost assuredly originate overseas and carried out by bots, not humans.

These networks are most often based in countries like India, Bangladesh, Pakistan, the Philippines, and Nigeria, taking advantage of workers’ surplus and lack of jobs to go around. With that said, there have been some click farms found in Europe and the USA. These are the exception to the idea that all bot farms generate clicks from outside of the country.

How much money does click fraud cost marketers and advertisers every year? According to a recent study from the University of Baltimore, ad fraud and click fraud have cost advertisers a combined total of $35 billion – a higher number from the estimated total released at the beginning of the year ($24 billion). Other sources have found that figure to be anywhere from $7 billion to $70 billion depending upon the data points used and the average cost per click.

Our team tends to believe that the University of Baltimore has a more accurate figure.

How can you stop click fraud? Luckily, there is a simple solution: invest in click fraud prevention software – like our sponsors ClickCease. This type of program acts as a shield between your ad and the bad actors who would defraud it. It is the most cost-effective solution for this issue you’ll find and is particularly worth it if you’re spending more than one or two hundred dollars on PPC advertising every month.

If the thought of adding another app or bit of software to your routine is troublesome, don’t worry – we’re here to serve you!

For the very best ad fraud detection and protection solution for your needs or professional pay-per-click ad management services, reach out to our experienced team! Out professionals at Digital Online Presence are ready to work closely with you to ensure your advertising campaigns convert and goes off without a hitch without the affects of fraudulent clicks. 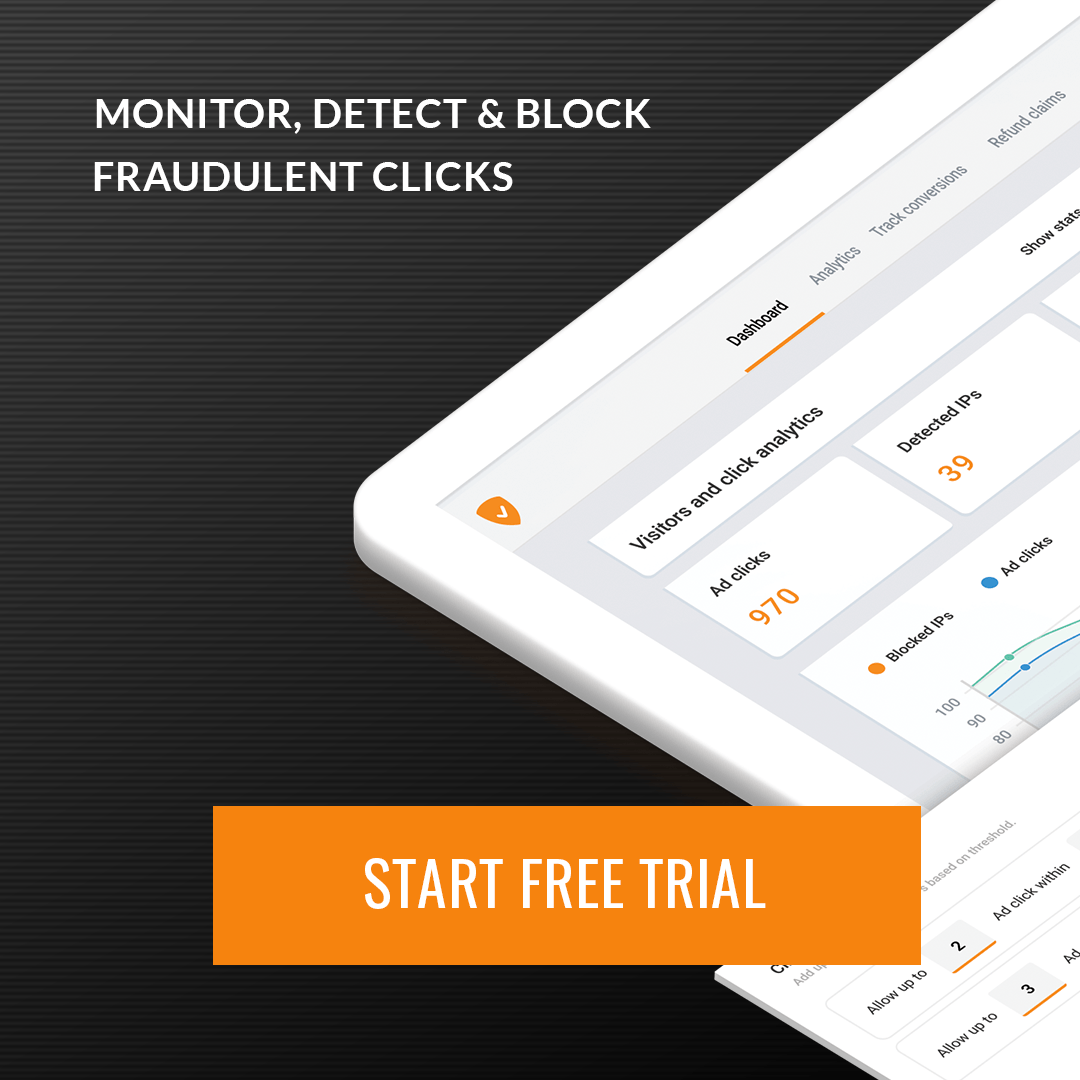